The ‘Garbage Dogs’ from Loutraki at the Corinthian Gulf.

This is the story of the ‘Garbage’ Dogs and how it all began. Afrodith, a Greek rescue Volunteer, and her dogs, have an enormous struggle every day.

Afrodith moved near the huge Loutraki landfill in 2018. Passing by the rubbish dump/landfill, was a life-changing experience for her, seeing the horrendous conditions the dogs and puppies were living in. She found packs of dogs and puppies in terrible conditions with broken bones, sores all over their bodies, starving, thirsty and sadly some dead. Soon, she began trying to take care of all the dogs she could find in the dump. She has no help from local authorities or from the government.
This dump is huge. And inside live about 130 dogs, dogs living next to tons of garbage in the most adverse conditions.

Countless puppies in a miserable condition are born and die helplessly in there without a chance to live a full life. This is tragic. An endless cemetery of animals. Dogs drink water from dirty and dangerous puddles, they scavenge in the trash. Who’s going to go to a rubbish dump to take care of dogs there? Aphrodith alone.

A lady who has been doing incredible work for years to find a solution, who has dedicated her life to this.
Afrodith, a kind-hearted and compassionate lady has captured, vaccinated, neutered and treated as many dogs as could be moved to the small plot of land she rents. She has no more space for the dogs left at the rubbish dump/landfill site. So, if a sick dog needs treatment today, she has no alternative but to try and capture the dog, put it in a crate and give it treatment. If very sick, they are taken to the vet’s for treatment then released back to the landfill, she has no other place to take the dogs. 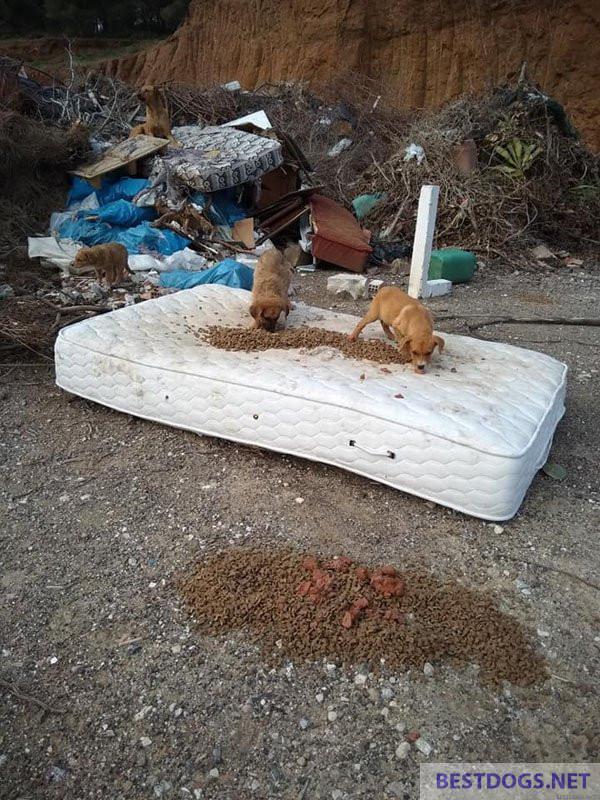 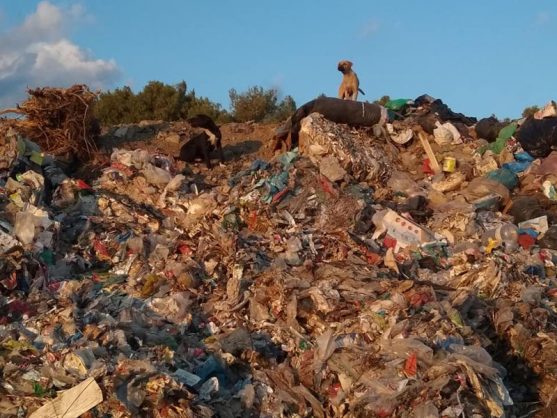 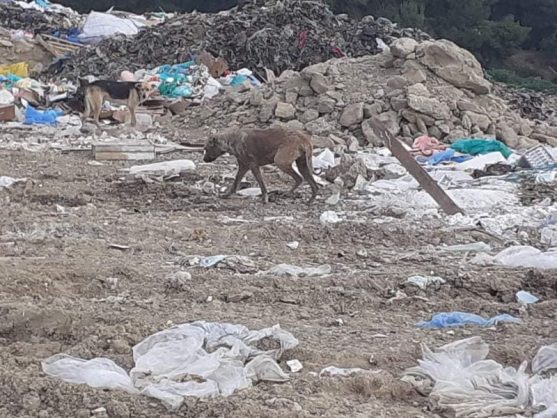 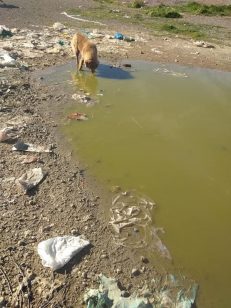 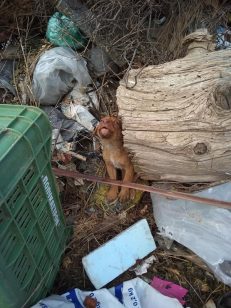 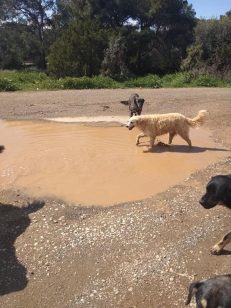 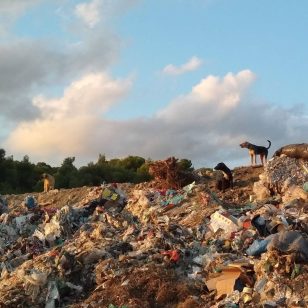 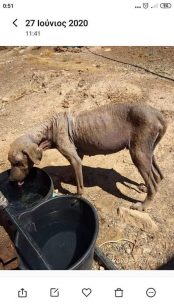 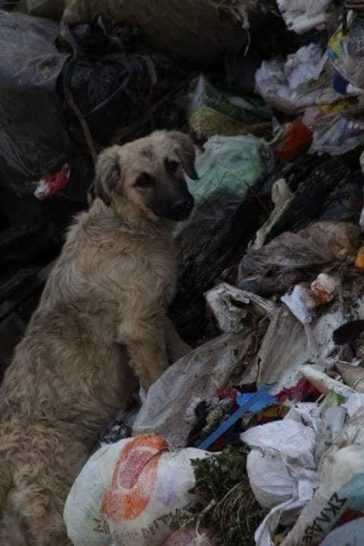 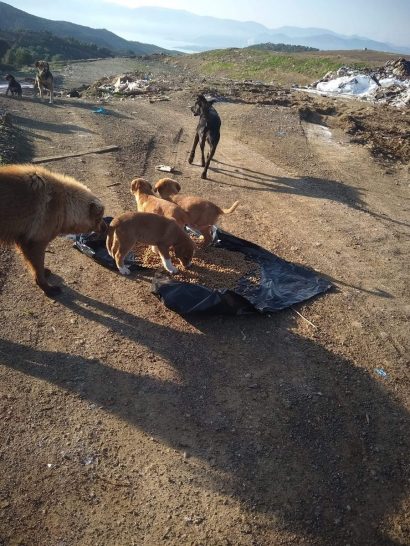 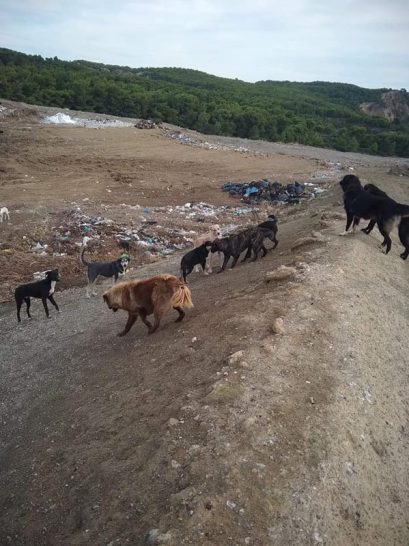 Her dream would be to take all the dogs out of the landfill and give them the life they deserve, with a loving family. To make her dream come true she needs a larger plot of land with shelter, to give as many dogs as possible a chance of a happy and healthy life with treatment, love and care – hopefully foster/adoption as well.

She created her facebook page (Volunteers for the animals of Loutraki Landfill) in 2018 so that people could see her work trying to help alleviate the suffering of the poor dogs. The smallest donation will help. She is alone in helping the ‘Garbage’ dogs. She can barely make ends meet.
Click on the Facebook page and check out her work. Let’s help her if we can. With a sack of food, a few medicines, fostering, adoptions, lots of shares on social media.

Her admirable and selfless work with the dogs has been recognised by a German charity Marika Kamari. They send pallets of dry food to help. They are a lifeline for the garbage dogs.

In Loutraki landfill there are about 130 stray dogs, most of which suffer horribly with diseases. The Municipality of Loutraki is uninterested in the well-being of the dogs and no measures have been taken to alleviate the situation apart from providing 4 sacks of dry food per week.
The dogs must be captured and neutered, treated for diseases and skin conditions. Food and proper shelter must be provided. The few Volunteers, usually Afrodith alone, that are trying to make things better for the poor dogs are barely able to make ends meet.

Over the past few years, Loutraki landfill has become the place for people to discard their rubbish as well as their pets. Irresponsible people, members of the local community, dump their unwanted dogs in the landfill.
Unfortunately, the same goes for people who do not live in the area. These animals lead a tragic life. They are, or they have become fearful, they are sick, wandering around, scavenging the garbage for food.
Most importantly, they are not neutered, so their numbers are increasing, the problem is then exacerbated.

Due to the conditions they find themselves in, exposed to all weathers, having no medication for ticks, fleas and worms they fall ill. Leishmaniasis, Ehrlichiosis, mange, skin diseases, sexually transmitted diseases are some of the most common diseases the ‘Garbage’ dogs are suffering from. These dogs and puppies are doomed to a life of misery and pain. The sole volunteer at the site is a lady with a heart of gold, Aphrodith. 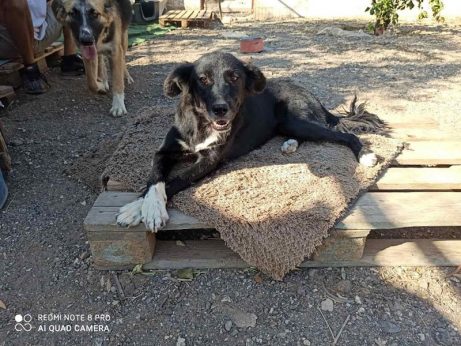 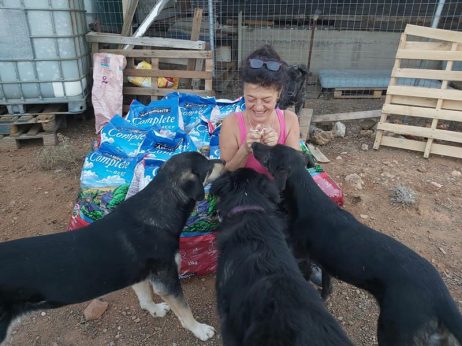 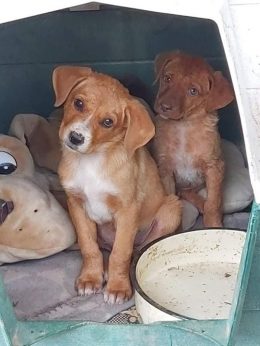 Greece is a very well-known tourist destination, due to its natural beauty, archaeological sites and beautiful landscape. Every year, it attracts many tourists, both foreign and local. What many people do not know, that behind this beautiful facade, there is an estimated population of 3.5 million strays wandering in the streets throughout the country.
A lot of Greeks do not castrate their animals, and now there are millions of stray dogs and cats. Most of them are street strays, starving, sick, in terrible condition and the government does nothing. So local Greek Volunteers try their best to alleviate this suffering. Many of them help, but the most look away and do not care.

More about: Volunteers for the animals of Loutraki Landfill (on Facebook).

A guest article by Julie Scourfield.