Presentation of the book of the police chief Nikos Chrysakis on ‘The legal status of animals in the Greek legal order’ in Aghios Nikolaos on Crete.

We had the honor of receiving a personal invitation from Police Chief Nikos Chrysakis to present his book ‘The legal status of animals in the Greek legal order’, which was held on the evening of 11 October 2019 at the Wyndham Grand Crete Mirabello Hotel Convention Center in Aghios Nikolaos, Lassithi.

This book has already been distributed to all police stations in Greece during the past week before the event to provide police officers with a guide to animal protection laws and the psychological background to animal abuse.
Police schools and police investigators now have comprehensive and documented guidance and information on how to deal with incidents or complaints about violations of the Greek Animal Welfare Act. The reception of the guests was from 5:30 pm and the event began at 6 pm.
The welcome was given by the Mayor of Aghios Nikolaos, Mr Antonios Zervos, the Directorate General of Criminal Investigation, Mr Antonios Rutzak, and the President of the Pan-Cypriot Union of Officers, Mr Karalakos. The Pancreas police union was also involved.

The event was also attended by, among others, representatives of the European Parliament N. Emmanouil Kefalogiannis, Mr Nikolaos Chronakis, Member of Parliament Vasilios Kegeroglou from Heraklion, Prosecutor General for Lassithi Kanakidas, Mayor of Sitia Mr Zervaki, Secretary of the Panhellenic Animal Welfare and Environmental Association Maria Choustoulakis, of the Heraklion Animal Welfare Association Nadia Zompola, the Presidents of the Associations of Police Officers of Rethymno, Lassithi and Heraklion, the President of Humanities and Social Sciences Helen Maraki and university lecturers were present. Representatives of the media and citizens of the region were invited.

From the Greek police participated in the event the Assistant General of the Regional Police Director of Crete Brigadier Stylianos Vardiampasis, the Deputy Director of Police Directorate Chania Police Director George Mastrantonakis, the Director of Rethymno Police Brigadier Paradeisanos, the Director of Heraklion Police Department Police Chief Spyridakis, the deputy director of the Lassithi police Kazamia, the head of the ELAS for organized crime of Piperakis, the commander of the traffic police department of the northern section of Crete, police deputy Christos Papadakis, as well as officers and heads of administrations and other police and civilian personnel of the police services of Crete.

The presentation of the book was made by Professor of Sociology at Panteion University and author Lidaknanes, Prosecutor General Heraklion and Doctor of Laws and Professor at the ELAS Police School Mr Theofanidis, Head of the Department of Organized Crime, the founder of the charity Save a Greek Stray (SGS) and the Oropos stray animal shelter, Erietta Kourkoulou-Latsi, and finally the author of ‘Legal status of animals in the Greek legal order’, Police Director Nikos Chrysakis of Heraklion.

Those present at the event were welcomed by the Mayor of Aghios Nikolaus Mr Zervos, the Head of the Regional Police Command of Crete Mr Routzakis, the President of the Pan-Crete Police Union Mr Karakoudis, the Speaker of the Police of Hersonissos Mr Titus and others, the Prime Minister of Heraklion Kegkeroglou Vassilios, the ELTA Regional Director Mr Meramveliotakis, the President of the Panhellenic Environmental Philosophy Federation Anastasia and the Director General of the ‘Alliance for Greece’ Mr Kaloudis.

The lieutenant general of the Cretan regional police, Mr Routzakis, pointed out this in his speech:

‘I congratulate police officer Nikolaos Chrysakis for the time and energy he has put into writing the book, giving us insight into the experience and knowledge of the police that are available and which best illustrate the accounts that we must give to every form of life.
I also congratulate the Municipality of Aghios Nikolaos and the Pancreatic Union of Police Officers who have supported the efforts of our colleague with great interest and respect in the sensitive area of animal welfare.
I am sure that this project is a unique reference, information and reflection for society as a whole, as it touches on issues of daily life and in particular the peaceful coexistence of man and animal. At the same time, it is an important knowledge tool for police officers dealing with animal welfare issues.
The cooperation of the Greek police with animal welfare organizations and competent local authorities is timely, close and constructive. On the occasion of today’s event, we would like to thank you very much for your active support in our work.
The way we deal with animals is a reference to human culture and education. Finally, I would like to invite you to join us all in the common struggle to eradicate the passive and active phenomena of animal abuse and to show love and care for animals and offer them the protection to which they are entitled’.

Excerpt with presentations from the speech of the author and police director Nikos Chrysakis:

The police director, Mr Nikos Chrysakis, explained among other things during his speech:

‘Today is a very special day for me and I thank you all for having honored me with your presence. With regard to the phenomenon of violence, it should be noted that animal abuse is not a criminal behavior of modern times …
My inspiration and my commitment to animal welfare were the struggles and voluntary efforts of the animal welfare movement for the protection of animals and in particular the organized animal welfare associations.
… Initiatives such as today’s are an example of an ever-growing vigilance and sensitivity that expresses the intention, will and desire of the Greek police leadership to further raise the awareness of all police personnel and to cooperate with volunteers, with a common effort and goal of eliminating violence against animals.’

‘… I think today’s event is of particular value because it is the first time that an important issue for Greek society has been addressed seriously and not superficially. You are well aware that the issue of animal husbandry is currently the subject of much debate in Greek society.
Nowadays, the subject of animal husbandry has entered our lives, because by improving our daily living conditions we are now looking at animals with a different eye. Only if we all work together can we be successful, and I am glad that such serious work has been done by a man from our region and with our participation.’ 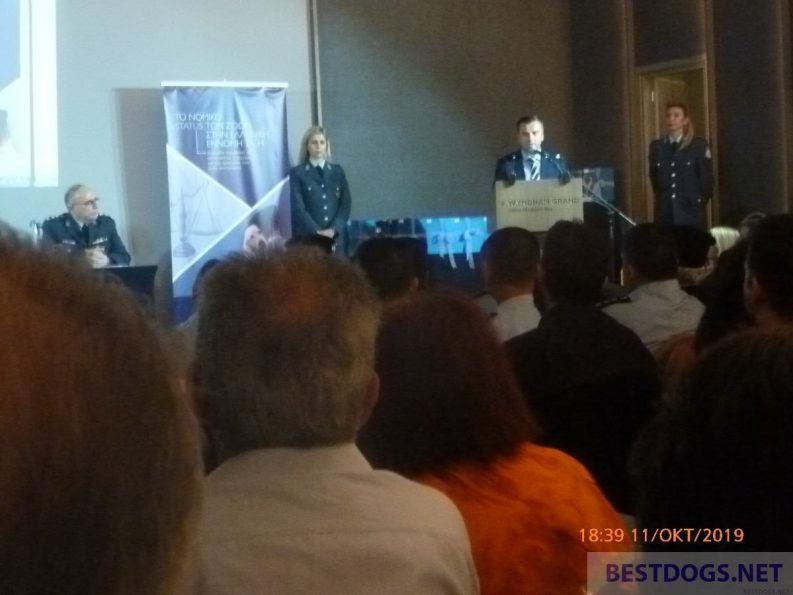 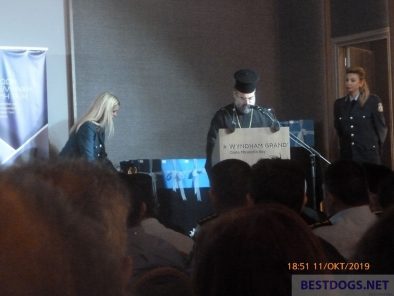 Speaker at the book presentation P.Titos 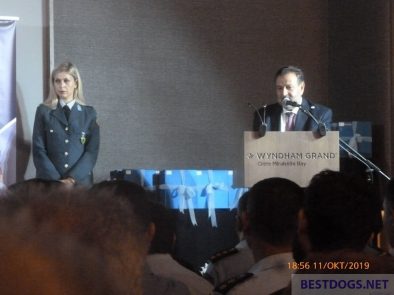 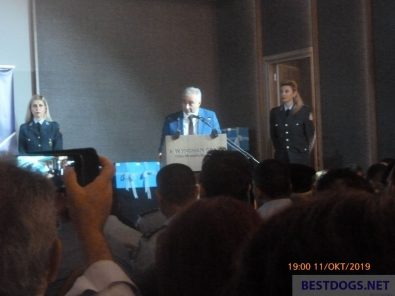 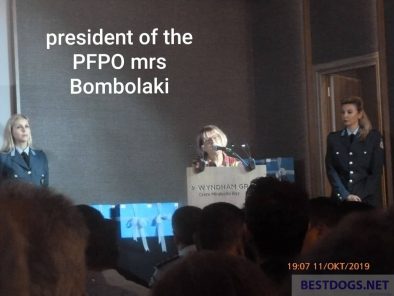 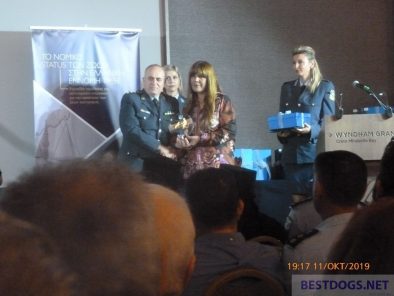 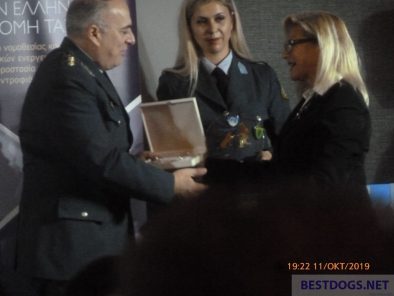 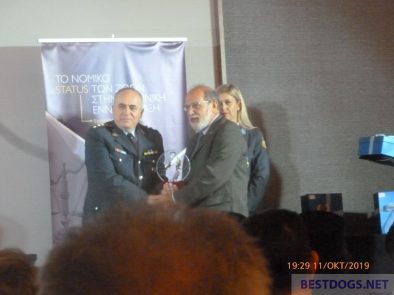 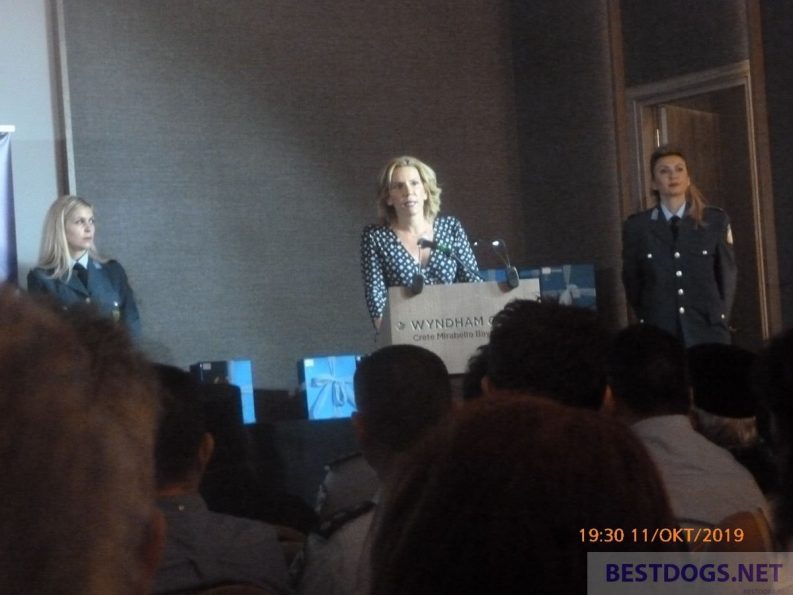 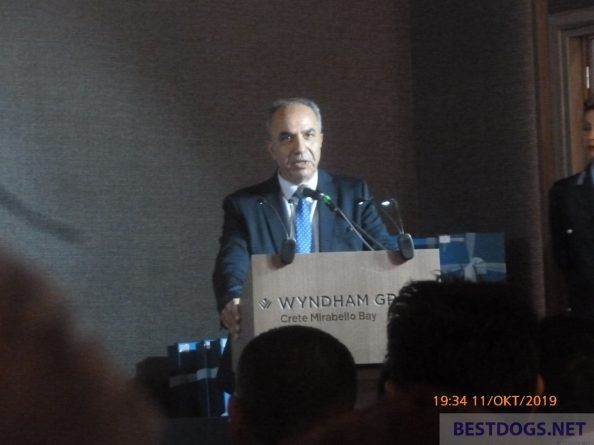 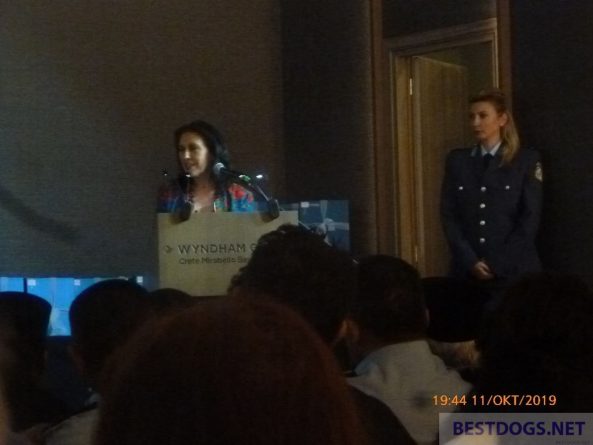 ELAS police representatives also read extracts from the book. It pointed out the close connection between animal abuse, violence against children and women and the perpetrators’ potential propensity to violence or crime. Studies from the U.S.A. are available and the Greek police receive support and training from American colleagues on these issues.

Photos of animal abuse and chain dogs were also shown in the presentation (see video) and made clear that animals also have a social feeling and a ‘soul’ of their own. Therefore, they have to be protected by the police. 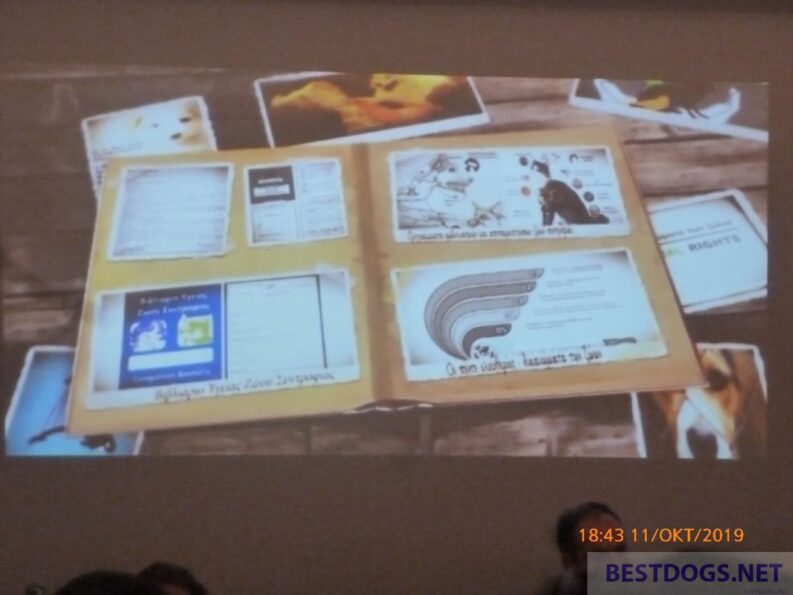 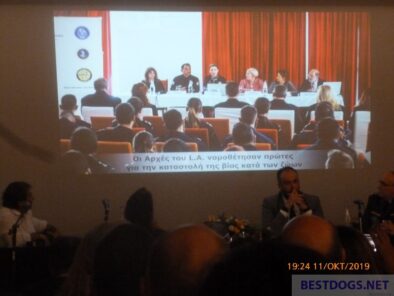 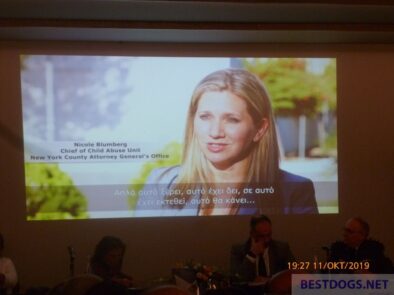 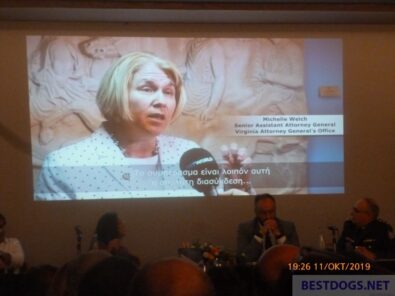 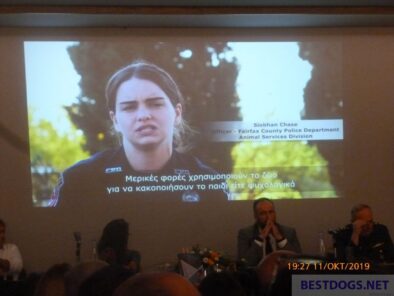 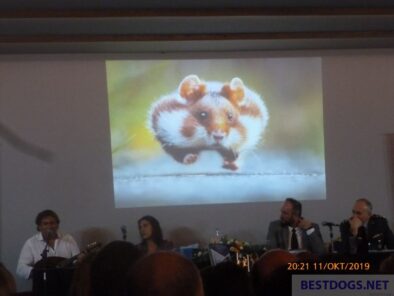 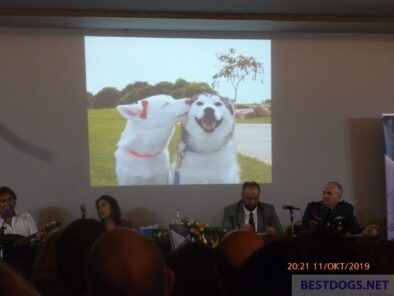 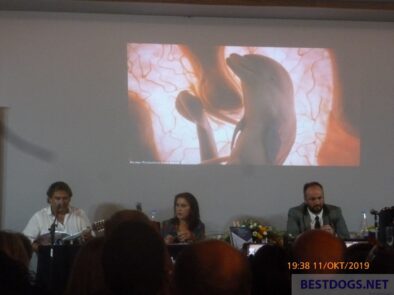 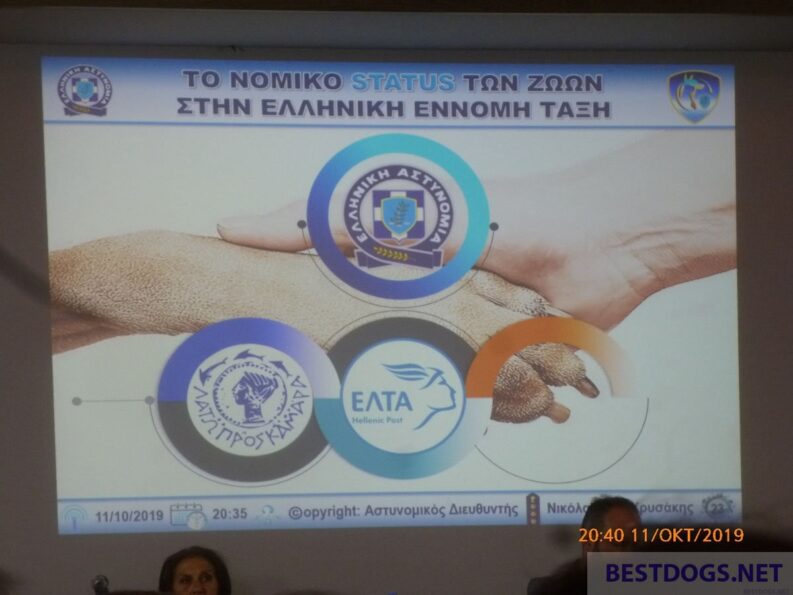 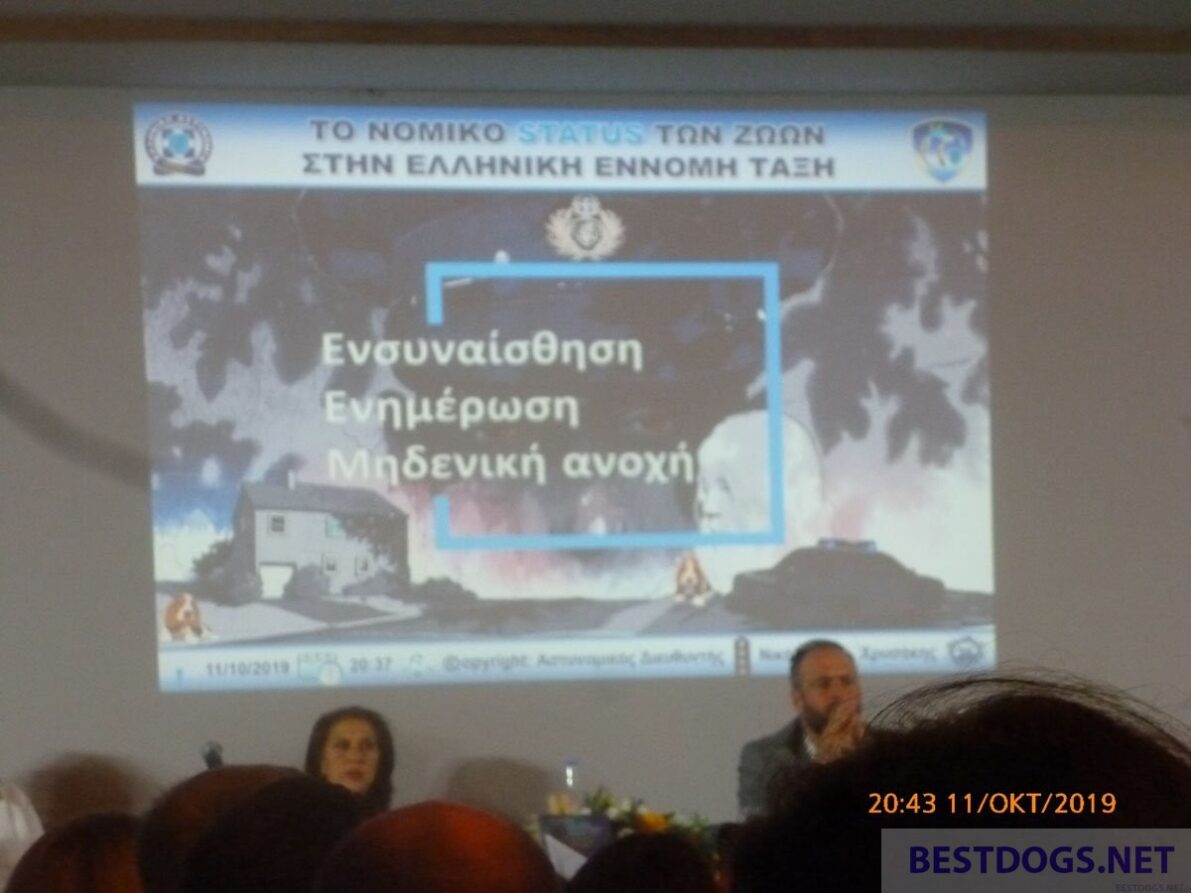 Regarding the way in which the police deal with complaints from tourists reported to BESTDOGS.NET, the police commander of Aghios Nikolaos, Stavro Spanoudakis, pointed out in the run-up to this event that the police are responsible for both people and animals, but unfortunately there is still a lot of work ahead of us.
Therefore, all justified complaints about animal abuse – also from tourists – are important !
On the previous Monday alone, during a raid on the Lasithi Plateau, numerous owners of chain dogs were arrested for one day and fines totalling 3,500 euros were imposed.

The local administrations have also become aware that animal abuse can only be stopped by sterilization and castration, for which the European Union has provided funds in the meantime. Here the German European parliamentarian Stefan Eck stands out particularly for the animal protection on Crete.

The well-known singer, composer and writer Loudovikos of Anogeia was responsible for the musical program and background music of the presentations.
At the subsequent buffet, musicians from the Art Conservatory of Crete also performed. 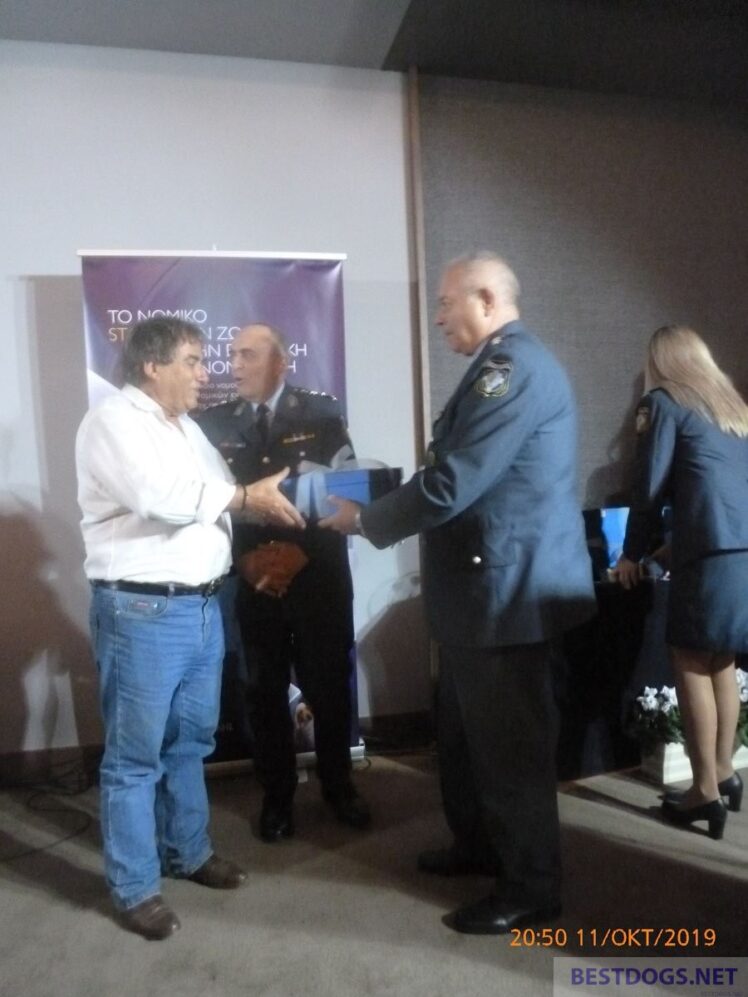 Award for the singer, composer and writer Loudovikos of Anogeia 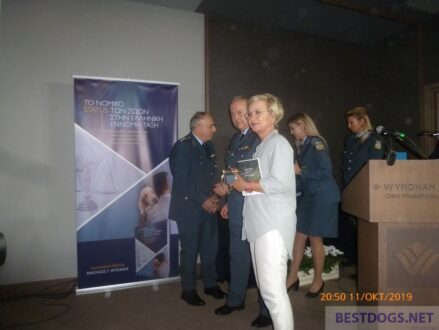 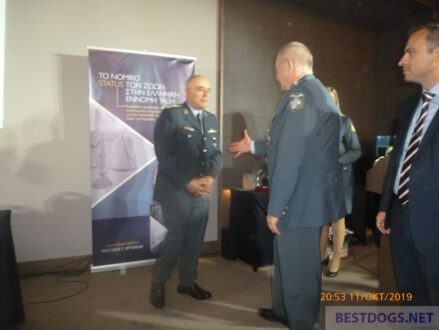 End of the event and congratulations to police chief Nikos Chrysakis 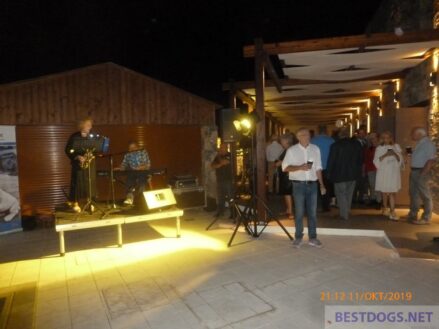